This is one of many stories of Jesus performing miraculous acts of healing in the gospels. These stories are inspiring, but also tricky - all of us know people in need of miraculous healing, who are very faithful to God, who ask for God’s healing, but whose healing we don’t see before their death. As parents and caregivers, how do we tell and celebrate these stories without leading children to believe that if someone isn’t healed, it’s because they didn’t pray hard enough? We don’t have great answers. Perhaps it is enough to simply tell the story without moralizing it. Notice some of the actions of Jesus - for example, the way he goes into the home of someone who is dying and cares for her by taking her hand and giving her something to eat. He cares for her body. That’s important! The early church was unique from those around them in the Roman world in that they cared for bodies. They were known as the people who weren’t afraid to care for the sick. As Christians, we follow Jesus by going to visit the sick, by caring for each others’ bodies.
Read It 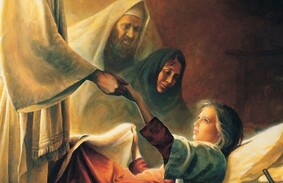 Mark 5:21-24, 35-43
21 When Jesus had crossed again in the boat[f] to the other side, a great crowd gathered around him; and he was by the sea. 22 Then one of the leaders of the synagogue named Jairus came and, when he saw him, fell at his feet 23 and begged him repeatedly, “My little daughter is at the point of death. Come and lay your hands on her, so that she may be made well, and live.” 24 So he went with him. And a large crowd followed him and pressed in on him.
​
35 While he was still speaking, some people came from the leader’s house to say, “Your daughter is dead. Why trouble the teacher any further?” 36 But overhearing what they said, Jesus said to the leader of the synagogue, “Do not fear, only believe.” 37 He allowed no one to follow him except Peter, James, and John, the brother of James. 38 When they came to the house of the leader of the synagogue, he saw a commotion, people weeping and wailing loudly. 39 When he had entered, he said to them, “Why do you make a commotion and weep? The child is not dead but sleeping.” 40 And they laughed at him. Then he put them all outside, and took the child’s father and mother and those who were with him, and went in where the child was. 41 He took her by the hand and said to her, “Talitha cum,” which means, “Little girl, get up!” 42 And immediately the girl got up and began to walk about (she was twelve years of age). At this they were overcome with amazement. 43 He strictly ordered them that no one should know this, and told them to give her something to eat.
Do It 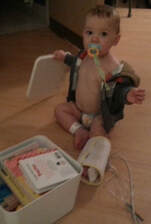 1. Care for your child’s body. Give them a gentle bath, rub lotion on their body, and talk about how in doing this care for their body, you are following Jesus. Let them care for your body by washing your hands and applying lotion to them.

2. Go visit someone who is sick, perhaps in the hospital or a nursing home. As a child, I (Talashia) would occasionally accompany my dad (a pastor) to visit people who were sick. I am so glad that I grew up comfortable with hospitals and illness, secure that God is there in our sickness as well as in health.

3. Remember times that people in your family have needed healing. Tell the stories, look at pictures, and remember where you saw God at work in those times.

4. How do each of you need healing? Or how does someone you know need healing? Together, write prayers for healing. Pray them together, perhaps praying them every day for a week or a month.
Pray It
God, you are a great healer. You care about our bodies. We want to help care for people in this way, too. Make us your healing hands in this world. Amen.
Powered by