Here we have yet another story of God calling and working through a young person! When Samuel went to anoint a new king from among the sons of Jesse, little David, the eighth son, wasn’t even there. The family sent him out to the fields with the sheep, because surely the youngest and smallest of the family couldn’t be the one God would choose to be king! Even Samuel thought that surely God was going to choose Eliab, a big, strapping man, but God said “No, I look at the heart” (read 1 Samuel 16:7). It was young David who was anointed, and young David who would be brave enough to fight the Philistine giant Goliath. This story is all about the surprising ways God works! God chooses a young, small boy to be the next king. Young David doesn’t use a battle weapon to defeat Goliath, but chooses a shepherd’s tool, a slingshot, instead. David is brave, but his bravery isn’t based on thinking he’s just so great. He can be brave because he trusts in God and looks at the situation as God does. God can surprise us, too. You are never too young to be brave. When we trust in God, listen to God, and try to follow God, we can sometimes see things in the world differently than others do. When that happens, we can, like David, speak up and act bravely.
Read It:  1 Samuel 16:1-13      1 Samuel 17
​ 7 But the Lord said to Samuel, “Do not consider his appearance or his height, for I have rejected him. The Lord does not look at the things people look at. People look at the outward appearance, but the Lord looks
​at the heart.”
Do It 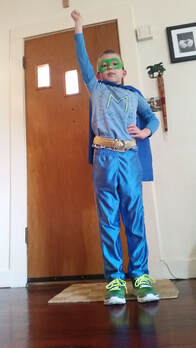 Option 1:  Superhero Costumes - David armed himself with a surprising tool. The superheroes of our culture often have weapons, things that are meant to destroy. But as we learn more clearly in the new testament, we are to “arm” ourselves with God, not with weapons. Look through Galatians 5:22-23, the fruits of the Spirit, and create some superhero costumes using these as your surprising superpowers.

Option 2: Sibling conflict. If you read this story from your Bible, you may notice that the older siblings don’t always speak with respect or kindness to their youngest brother. If you’re struggling with this in your household, this story may be helpful in sorting through those conflicts. Read it with an eye for sibling rivalry, and then talk through the ways your family sometimes makes some of these same misjudgements. What gifts (instead of deficiencies) can your children recognize in each other?
Pray It
God, you see my heart. Help me see the world the way you see it and be brave. Amen.
Extra
Coping with Sibling Rivalry
"As long as there is more than one child in the house, sibling rivalry is inevitable"
Why siblings fight; The benefits of sibling rivalry; Factors that influence sibling rivalry; Strategies to manage the mania.​
Powered by